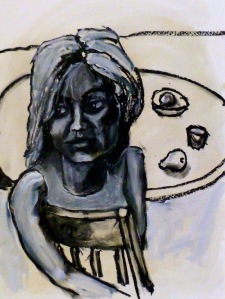 In 1967 I was a fresh entry into the MFA  program and was attending a weekly interdepartmental seminar regarding the baleful influence of Surrealism upon the Arts. There were 10 or 12 attendees, and often two or three lecturers holding forth. I think the moderators were junior profs, TA’s, or Adjuncts. None of the grey hairs were in attendance. There were 3 or 4 students from the Art Department, a couple from the Theatre, and the remainder were from various Literature classes. Attendance was a bit sporadic, but I was there every meeting. The moderators were attempting to generate some dialogue amongst the various intellectuals in attendance, and it was heavy sledding.We were requested to bring samples of our work to prompt general critique, thus there were readings, drawings, a recitation accompanied with harmonium etc.

Evelyn was a striking young woman, in her late 20’s. She exuded uncertainty and depression. She had a wonderfully expressive English accent at a time that the Brits owned rock’n’roll on the radio. Anything she said or read aloud was thus gilded with what we all took to be an upper class accent. She had been educated in a private English school, and had attended a British University, supplemented with a year at the Sorbonne. Her parents were governmental employees of some sort.

I was intimidated by her at first. She was enthralled with Artaud, Baudelaire, Rimbaud, Breton etc which in her humble opinion had never and could never be adequately translated. I was a Gunter Grass, Brecht man. Her presentations were based upon the ‘cut-up’ method, and had sudden juxtapositions of French and English, bits of this and that, a few words then a shift in tense or topic or language. She would assume a bit of a fluty voice in much of the English and a more throaty but endearing voice in the French. To my unsophisticated ears it didn’t make much sense, but she seemed quite earnest about it all.

Soon after the seminar got underway I observed some public display of affection that seemed to indicate that she was ‘in love’ with another Artist – a thoroughly raffish,big nosed, rabbit toothed, scrawny guy from Slovakia, equipped with an impenetrable accent. His work involved tediously rendered  cartoon and tattoo imagery, seemingly randomly placed on three foot frames filled with ‘diamond tucked’ dark naugahyde.

I had volunteered to teach 8:00 classes because I was working nights in a machine shop. He was sleeping in the MFA group’s tiny studios and I often woke him at 7:30 A.M. I had to get ready for the class. Thus I knew that he was sleeping with any warm body that moved. There would be bitching and moaning as the lights came on and they staggered around getting dressed. Any member of the seven sexes was evidently fine with him. Frequently the entire studio area reeked of smut. I would like to assume that Evelynn had no idea regarding his indiscriminate behavior. I wouldn’t want to believe that this attractive, educated and intellectual young woman was simply hot meat for that lug.

Near the end of the term I wandered into an expresso shop for a hit of caffeine, and there was Evelynn, hanging over a chair, eyeing the door. Her little table was covered with cups, a gnawed pear, etc. I nodded at her, and sat a table facing her, and we had a bit of a chat while she was eagerly awaiting his arrival. In those ancient times, the cellphone was not available and constant monitoring of the whereabouts of others was impossible. We casually chatted about life until I had to leave. He had not shown up, of course, but I did the illustration as I remember her.

Artist and writer END_OF_DOCUMENT_TOKEN_TO_BE_REPLACED
This entry was posted on Sunday, March 22nd, 2015 at 12:24 am and posted in Uncategorized. You can follow any responses to this entry through the RSS 2.0 feed.
« Malcom
Leonarno »