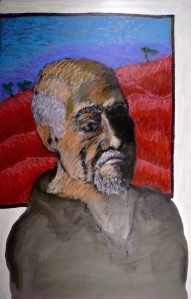 Jim Ridgely was a painter. He was enjoying his 50’s when I was in my 20’s. His work was frequently in group exhibits. At the time he and a few others represented the “New” Northwest Artists. They were supposedly breathing fresh visions to the more staid NW work done in the previous couple of decades by the likes of Graves, Tobey, Callahan, Cumming, Guy Anderson, etc. Ridgely was of the same generation as William Ivey and Okada. During my studies at the U-Dub, I met many of these established artists and their work was an inspiration to me. The work appeared to be within the realm of the possible: with persistence, I could do that. Ridgely disappeared somewhere in the 60’s, I have no idea what became of him and he doesn’t appear in an internet search.

I didn’t like Ridgely, his work was starkly simple and very lushly painted, but it seemed cold and austere despite the slathering of pigment. We exchanged a couple of sentences. He was aloof, and full of himself. At a gallery he could be heard venting to an informal group of ‘art lovers’. He seemed energetically self-involved in some form of nature mysticism in which he was the primary if not the sole interpreter. I guess his paintings sold with some regularity, but looking back, I suspect he was teaching and perhaps using his studio for private instruction. One of the lessons for the ‘art scene’ observer is that the support system for the ‘fine artiste’ is often opaque. The supportive working wife, the trust fund check, the enamored lover’s wages, the extent of the abject poverty, is often rendered invisible. The lies regarding sales income, and extensive gallery support, the successes are greatly exaggerated. The recitation of profound relationships with the splendors of nature and the depth of the philosophical discourse are often thinner than a coat of shellac.

Artist and writer END_OF_DOCUMENT_TOKEN_TO_BE_REPLACED
This entry was posted on Sunday, March 22nd, 2015 at 12:46 am and posted in Uncategorized. You can follow any responses to this entry through the RSS 2.0 feed.
« Beth Lynden